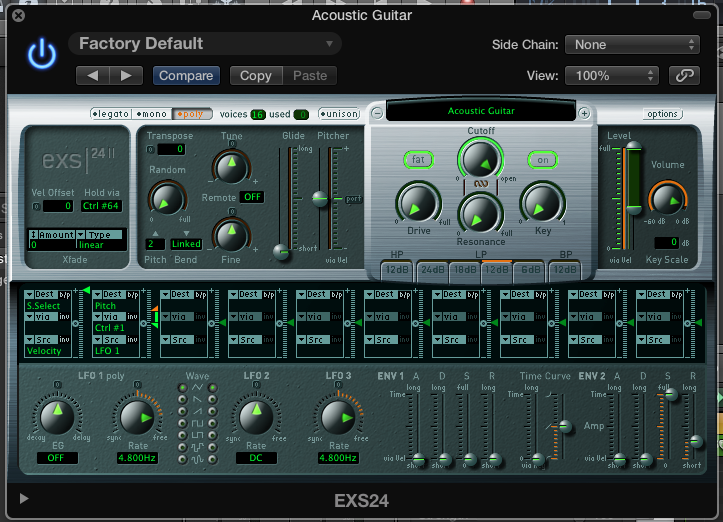 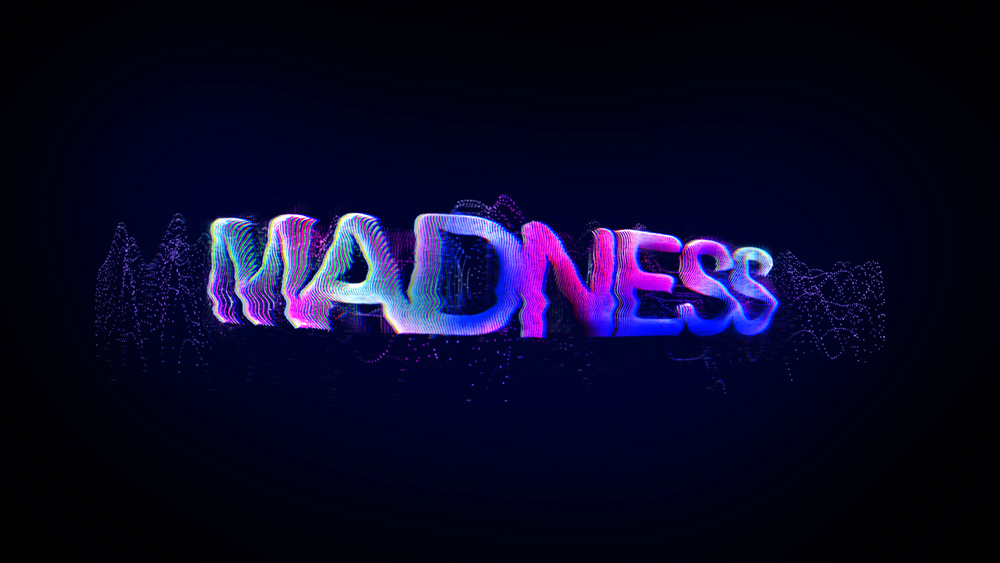 What’s In This Post?
In this post you can find some starting point timbres to help begin your Task 3A ‘Madness’ re-production. These are only a starting point and should be adapted by yourself as you see fit to enhance your work.

This instrument fills nearly the entire track, the timbre stays the same, however many of the notes change – so watch out for that! We’ve found the best way to start with this Bass synth, is to open up the ‘ES2’ Virtual Instrument on Logic 9/X. As you can see in the below image, we’ve adjusted the cut off and wave forms to give a ‘gritty’ harsh sound. Use the below image settings as a starting point, then have a play! Spend time with the sliders at the bottom, controlling the attack, decay, sustain and release – this will change how long and the over-all sound you hear! 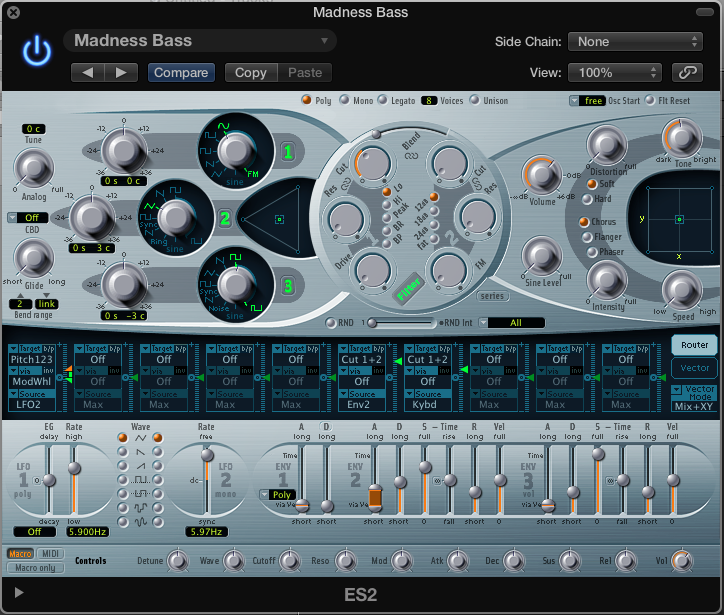 After getting the desired sound, It’s a good idea to just give your bass some edge. Think about boosting the low/mid ranges. For this track it isn’t a great idea to boost the highs, as the sound is very dissonant. Take a look at how we suggest adding the EQ below. 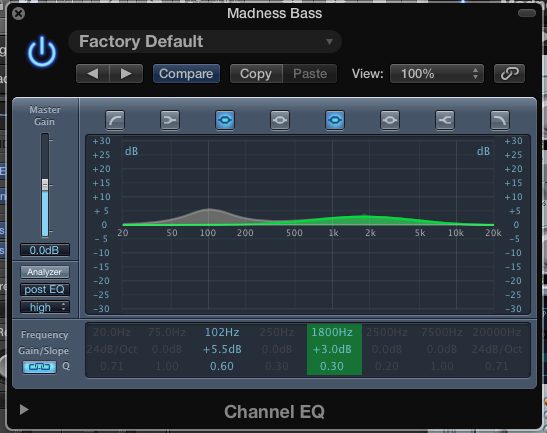 This could be a good instrument to use as one of the live recorded tracks! Post recording, think about the effects you can use on Logic to enhance your recorded piece. Think about using Delay, Amp Designer, Space Designer, EQ, Pedal Board, Distortion.

In the same way as the Bass synth timbre, you can use the same Virtual instrument however be sure to change your EQ to feature more Mids; rather than high or low frequencies. This instrument should also be louder than the Bass, however experiment with both – small differences in volume/panning can make big differences to how the overall mix sounds.

At bar 13, a sustained pedal Bb note starts. This sounds like an organ. To create it use the ‘Vintage B3 Organ’ Virtual Instrument with a starting preset; ‘Jam Band Lead Organ’. As the sound is quite high pitch, and low frequencies are minimal, you can follow the settings below as a starting point. 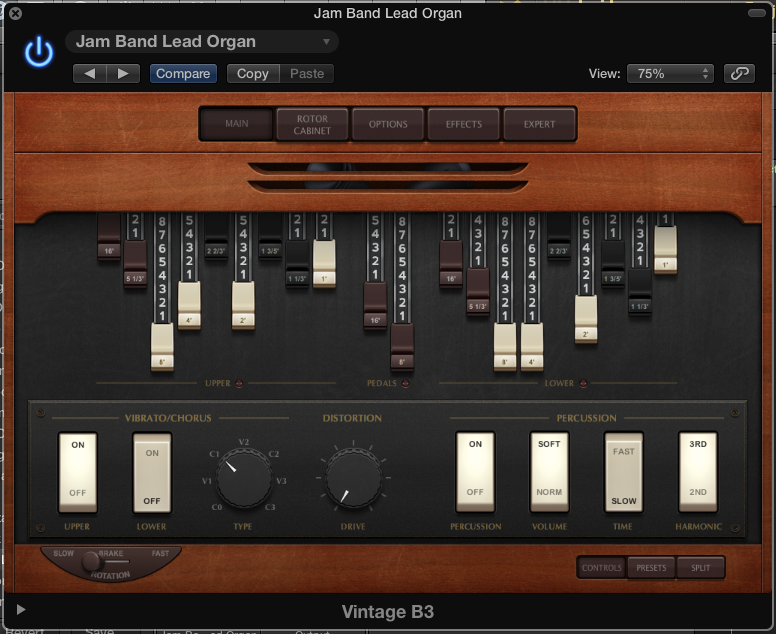 Again, just to boost that top end, you can add a small curve in your EQ line; Our peak is around 3-4kHz. 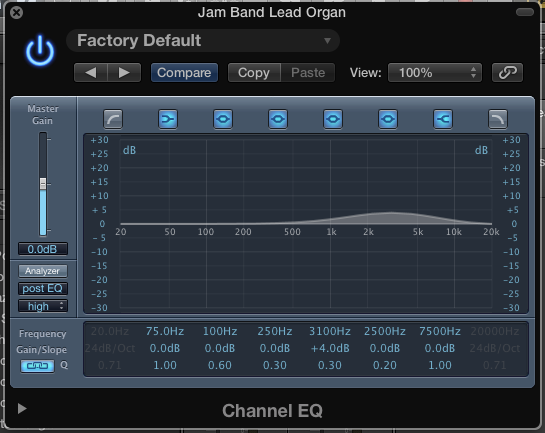 Next, thinking about the guitar heard in the track, it isn’t very loud in the mix however sounds very muted. You could use the following as a starting point, however remember EQ decisions are most important. Use the ‘ESX24’ Virtual Instrument with a ‘Acoustic Guitar’ starting preset – Controls shown below.

EQ for this timbre is very important, you want to take away high and low frequencies however, only the real bass and the real trebles – leave some lows, mids and highs! A possibility is shown below, however do experiment! 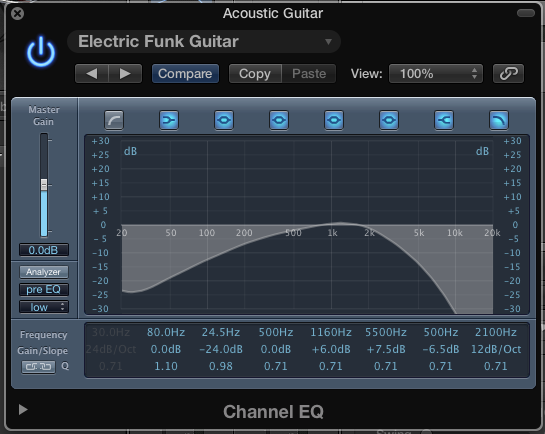 As you can see from 20Hz to200Hz most of the low frequencies have been taken away, however with the initial settings used, it doesn’t sound as ‘tinny’ as you’d expect.

You may wish to add an effect/modulations to the track to give it that tone. You can use a Rotor Cabinet to do this. Settings shown below! 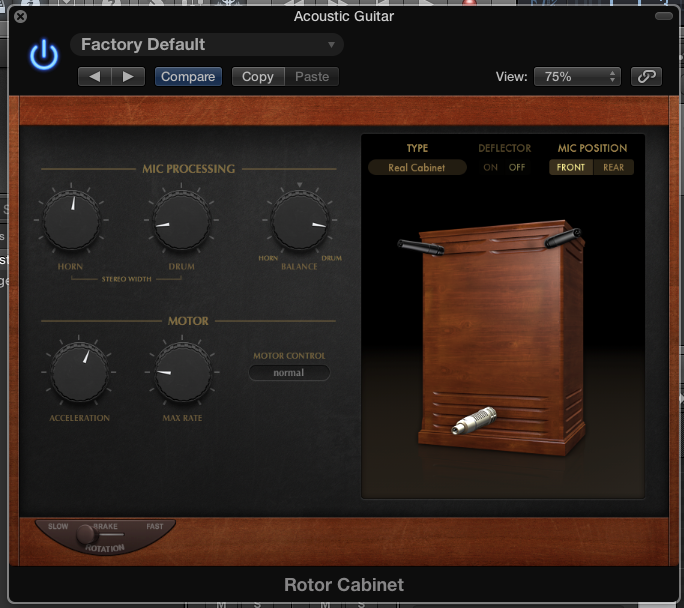 -There are many instruments that are very low in the mix, be sure to listen out for them, including the piano! (However, this one is very very low! – pppp dynamics!)

As always, and as said previously – please remember these are only starting points, and should not be used to complete your decision making whilst re-creating Muse – Madness.