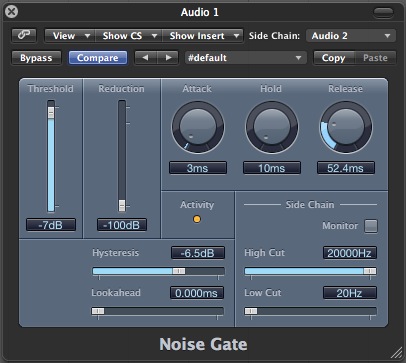 Gating is the process used to control volume of an audio signal, commonly used to take away unwanted noise that is audible when the audio signal is at a low level. Using gating in a DAW (Digital Audio Workstation) can remove any background noise, cross talk, low-level hum as-well as other annoying interference’s in your mix.
A noise gate works by allowing signals above a threshold to pass, whilst reducing signals that become below the set threshold amount.

Threshold – Signal that falls below the threshold amount will be reduced in level.

Reduction – Amount of signal reduction, how much noise is reduced.

Attack – how quickly the gate starts to work after the signal falls below the threshold.

Hold – The amount of time the gate is kept open after the signal falls below the threshold.

Release – how quickly it takes to reach the maximum point after signals fall below the threshold amount.

Hysteresis– The difference between the threshold values that open and close the gate – in decibels.

1969 – Gating technique created, and used by The Beatles.

Multi-Latch gating: Technique used first in ‘David Bowie – Heroes’, however commonly used in classical music. Bowie had 3 microphones placed 9 inches away from each other, a different gate was applied to each microphone allowing the farthest away microphone gate only to be triggered when Bowie hit a certain vocal volume; when this occurred all other microphones were muted automatically. The technique was credited to producer Tony Visconti.