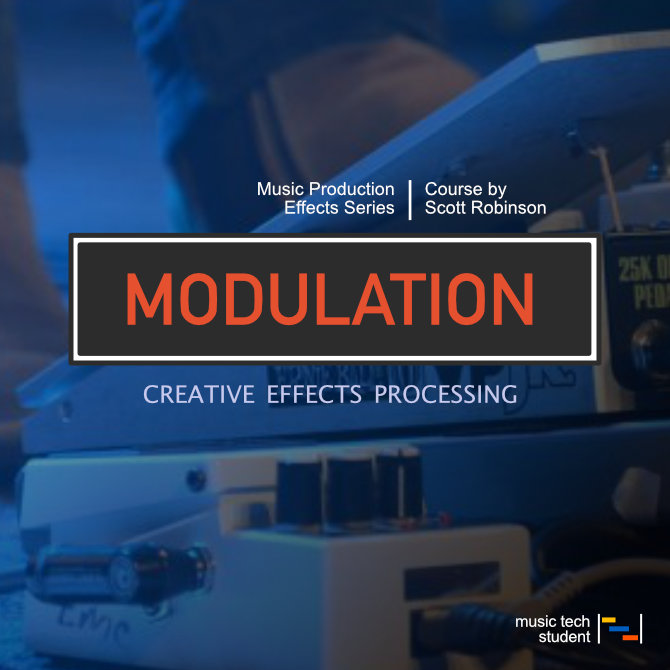 Within Logic Pro there’s a number of modulation based effects. These primarily will affect a sound based upon and LFO as a source of variation modulating a set parameter within the plugin.

In this section of the Logic Pro course we're going to look into Chorus, which takes a copy of the signal and apply a delay to it then using a mix setting mixes that delayed signal back into the original causing comb filtering, this delay is then modulated and causes the chorus effect which is very effective on vocals in stereo.

Flanger which is very similar to chorus but uses a shorter delay time and as such causes a different effect but is still based upon comb filtering. Flangers will generally allow feedback into the device for further sound design, we look at creating the siren effect using the flanger further on.

Phaser utilises a band pass filter to take a specific frequency area but can also process the whole spectrum much like a chorus and flanger. It then delays the signal and mixes it back into itself but this time also altering the phase relation between the two signals, The Logic phaser supports steer independently and is excellent for creating very wider immersive sound effects.

The Rotor Cabinet plugin often referred to as a Leslie cabinet splits the sound spectrum into two parts and utilises the doppler effect to create wide stereo and immersive sounds from otherwise bland sources, Originally used to amplify church organs to the crowd.

Scanner Vibrato is a specific emulation of the vibrato used on hammond organs, its purpose however doesn’t differ in that it aims to manipulate pitch with an LFO modulation source and is excellent for adding pitch variation to static sources like a dry vocal or artificial strings.

Tremolo effect is a modulation of amplitude over time, using a rate to add variation to the level of a signal, This modulation effect is used on many different sources but most notable vocals and guitar.

Question 1: Chorus is very similar to Flange but ...
Has a longer delay time than flange
Question 2: Rotor Cabinet might also be referred to as?
Leslie Cabinet
Question 3: Vibrato is modulation of which element?
Pitch
Question 4: Tremolo is modulation of which element?
Amplitude
Question 5: The Phaser uses a ___ to filter the audio spectrum
Band Pass Filter
Question 6: Chorus, Flange and Phasers all cause?
Comb Filtering