Distortion and Lofi effects are audio processes that alter the relative quality of sounds. This can be by the addition of harmonics, reshaping of waveforms, reduction of sample rate and reduction of bit depth. They will do this by emulating various physical processes like tubes, valves and diode circuits and in Amp simulation often a convolution capture.

Distortion plugins by nature cause sounds to be amplified, while some plugins will control this process others will not and require you to adjust them manually. As a result, significantly louder sounds than expected can occur, And feedback into distortion can lead to rapid and dramatic increases in volume. Monitor and program distortion plugins at a low monitor level while learning them. 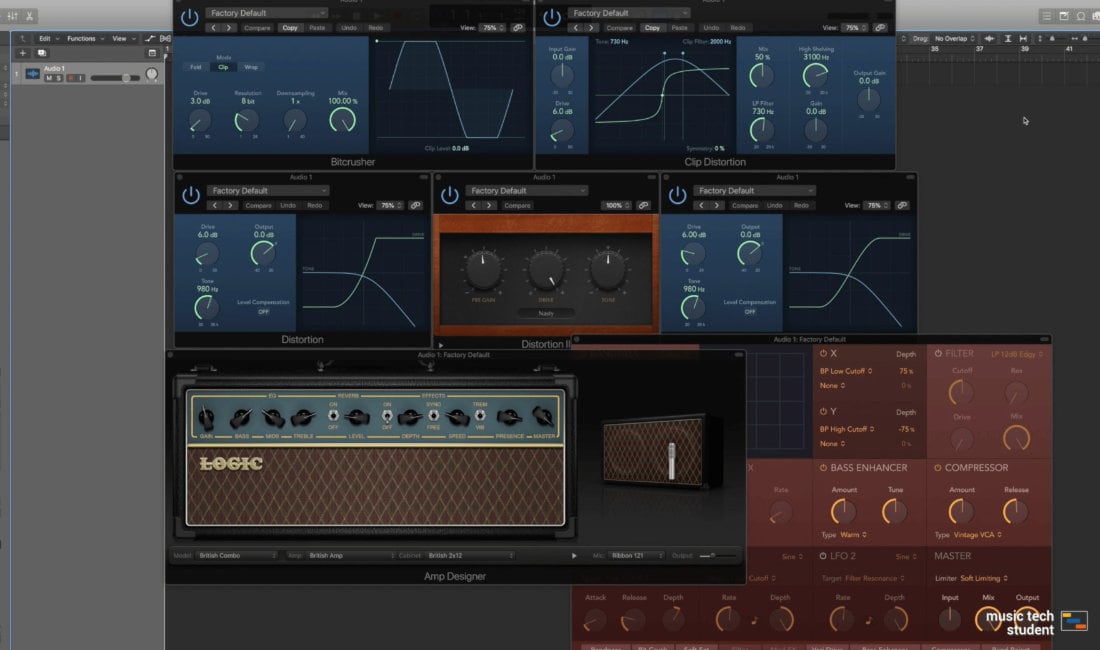 Many distortion plugins, while emulating different processes and achieve different styles, will have some similar controls. The Drive control is found on almost all digital distortion plugin. This control usually will be the one that pushes audio directly into the distortion algorithm.

Most will also have input and output level control. This is mainly for gain staging and to give control over the level of the signal fed into the unit and or to control the post level on the output. Noted the output level previously would often be hugely increased, making the output control useful to retain levels where needed.

In Logic Pro X, you will find several distortion plugins with a similar interface. These are all different type of distortion emulation with subtly different controls. Despite their similar-looking nature, all have a very different end result.

The other type of distortion units we find in Logic Pro X are the Amp Designer and Pedal Boards. These aim to emulate various parts of equipment used to amplify, colour and tone guitars generally But are multi-purpose.

Logic Pro X also features a BitCrusher plugin, and This has the same GUI as the other distortion plugins; however, this is technically a LoFi plugin. The main difference between distortion and LoFi is that distortion will generally amplify and add harmonic content to the audio while a LoFi effect will do things that reduce the digital quality like bit depth and sample rate. The Logic Pro X Bitcrusher plugin does also feature the ability to drive and distort the signal before reduction.

Explore the distortion plugins folder and open up each. Look and compare the similar settings and controls across them. See if you can see the workflow of each and how they differ slightly.

It reduces the quality of the sample rate/bit depth
Drive control
Physical processes like tubes, Valves and diodes
lead to rapidly increased volume
Alter the relative quality of sounds