A Guide to Reggae Worksheet 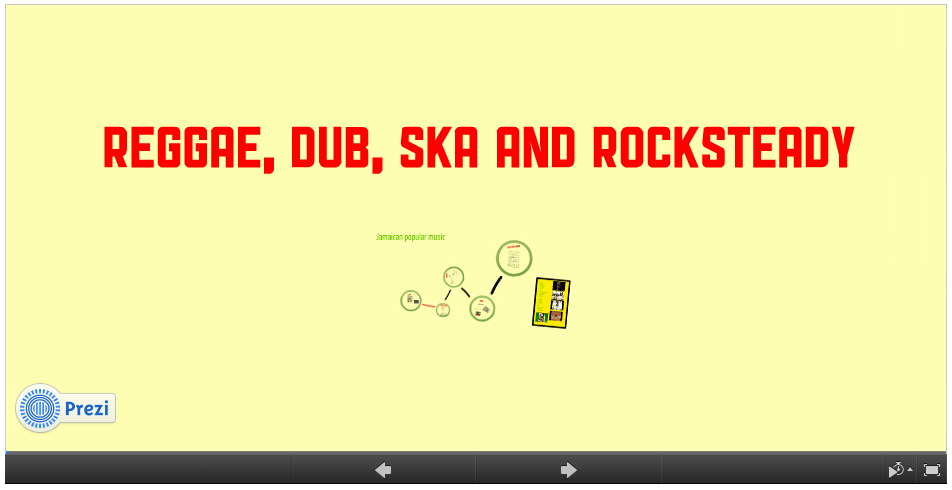 The History and Development of Jamaican Music

1920’s – For decades, beginning in the 1920’s, the dominant music in the Caribbean was Trinidad-based calypso.

Early 1950’s – During the 1950’s Jamaican youth was turning away from the American pop foisted on them by Radio Jamaica Rediffusion (RJR) and the Jamaican Broadcasting Corporation (JBC). Weather conditions permitting they listened instead to the sinewy music being played on New Orleans stations or Miami’s powerful WINZ, whose playlists included records by Amos Milburn, Rosco Gordon and Louis Jordan. Significant New Orleans artists of the time included Fats Domino, Jelly Roll Morton, Champion Jack Dupree and Professor Longhair.

It is surmised that the delay effects which are an important part of the reggae/dub sound may have initially been inspired by the oscillations in the signal from these far away radio stations.

Mid 1950’s – During this period, Jamaican bands began covering U.S. R&B hits, but the more adventurous took the nuts and bolts of the sound and melded them with energetic jazz conceits – particularly in the ever-present horn section – and emerged around 1956 with a hybrid concoction christened ska. Ernest Ranglin, the stellar jazz-rooted Jamaican guitarist who backed up the Wailers on such ska classics as “Love and Affection” and “Cry to Me,” says that the word was coined by musicians “to talk about the skat! skat! skat! scratchin’ guitar strum that goes behind.”

Practically overnight, ska spawned a major Jamaican industry, the Sound System, whereby enterprising record shop D.J.’s with reliable U.S. connections for 45’s would load a pair of hefty P.A. speakers into a pickup truck and tour the island from hilltop to savanna, spinning the latest hits. D.J.’s also gave themselves comic book nom de plumes like Prince Buster and Sir Coxsone Downbeat. Competition grew so heated that D.J.’s covered up labels or scratched them off so that rivals couldn’t keep up with the latest sounds.

Late 1950’s – The ska craze spread to London in the late 1950’s and early 1960’s and in the United Kingdom ska soon came to be labelled bluebeat. This music would probably have remained a mere curiosity were it not for the efforts of a white Anglo-Jamaican of aristocratic lineage named Chris Blackwell. As a hobby-like business venture he had set up a small scale distribution network for ethnic records but he had a vision about the potential appeal of Jamaica’s oscillating answer to the blues.

1964 – In England Blackwell struck up a synergism with the fashion conscious mod and skinhead teenage movements through his seminal Jamaican rock records. His big breakthrough came when Millie Small, one of the artists he managed, had a huge U.S. hit with “My Boy Lollipop.”

Back in Jamaica “stay and ketch it again” became the rallying cry of Sound System ska. Soon every “Rude Boy” (ghetto tough) and country orphan wanted to hear his own voice barrelling out of a bass speaker. The Wailer’s first single “Simmer Down” was a ska smash in Jamaica in late 1963/early 1964 and called on the island’s young hooligans to control their tempers.

1966 – The ska-bluebeat advance into what became rock steady. James Brown and funky U.S. stuff was cited by Bob Marley as an influence for “de young musicians, deh had a different beat – dis was rock steady now! Eager to go! Du-du-du-du-du… Rock steady goin’ t’rough.” Marley was right on target when he linked James Brown with the transition, since R&B was to ska what soul was to rock steady.

1968 – As far as Jamaican record buyers were concerned, the origin of the word reggae was the 1968 Pyramid single by Toots and the Maytals “Do the Reggay” (sic). Other possibilities as to the origin of the word include Regga, the name of a Bantu speaking tribe on Lake Tanganyika and a corruption of “streggae,” which is Kingston street slang for prostitute. According to Bob Marley, the word is Spanish in origin, meaning “the king’s music” but according to veteran session musicians the word is a description of the beat itself. Hux Brown of the Skatalites and lead guitarist on Paul Simon’s 1972 hit “Mother and Child Reunion” says that it is “just a fun, joke kinda word that means ragged rhythm and the body feeling.”

1970 – During 1970 and 1971 a jumble of Wailers singles were fed to the Jamaican audience backed by dub and “version” mixes of the A side. Osbourne “King Tubby” Ruddock was one of the originators of dub. While working as a selector for Duke Reid’s Sound system and for Treasure Isle studio, he began using a dub machine to eliminate vocals from test cuts of a two track single, getting a private charge out of the way the rhythms – in the space of a microsecond – seemed to snap, crackle and then pop like a champagne cork when they had no vocal track to soften them. Equally exciting to him was the abrupt reintroduction of the complete mix “Jus’ like a volcano in yuh head!” Tubby would say.

Springing the effect on a crowded dance hall one evening to blow a few minds (and possibly some speakers -since he liked the prankish ploy to be loud), the “dub-out” stunt was received like a revelation on high. It soon became an essential novelty at the larger jump-ups and then a standard fixture. Everybody began to examine the dub versions closely to determine whether Kingston rhythm sections held their own when stripped naked. Tubby added echo and reverb at ever more erratic intervals to enhance the “haunted house” effect of the stark trompings and backbeats going bump in the tropical night.

1971 – Kingstonians’ appetites had been whetted for all-dub LPs and Lee Perry provided a remixed dub of Soul Revolution called Soul Revolution II. Perry eventually got so hooked on dub that he began layering sound effects (train whistles, running water, animal noises) on just about every old track he had in his possession.

1972 – The Wailers had been quite successful commercially in the Caribbean during most of Jamaican rock’s evolutionary phases but after signing with Island records in 1972, they issued a string of well received albums on the internationally distributed Island label beginning with Catch a Fire (1973).

Bob Marley and the Wailers’ mesmerising and often incendiary songs were customarily steeped in images of Third World strife and underscored by the turgid tenets of the Ratafarian faith as well as by symbols and maxims derived from Jamaican and African folklore. Rastas smoked “herb” to help with their meditations and the Rastafarian colours were richly symbolic

1974 – The Wailers showed themselves to be much more than a mere Jamaican rock phenomenon as their music began to concern itself with social issues on the island but no one in Jamaica was prepared for the impact the music of Marley and company would eventually have world wide. In 1974 Eric Clapton reached the Number 1 spot in The United States and much of Europe with his version of Bob Marley’s anguished shantytown confessional “I Shot the Sheriff.’

1976 – Both Peter Tosh and Bunny Wailer left the Wailers in 1975 and have released numerous solo albums and from 1976 onwards, the Wailers concerts were invariably sellouts. Other Jamaican artists to achieve significant commercial success outside Jamaica during this period included Toots and the Maytals, Jimmy Cliff, Johnny Nash and Peter Tosh.

Late 1970’s – With the coming of punk and the subsequent new wave in the mid to late 1970s, Jamaican influences in music spread still further. In 1979 -1980 an eclectic new sound was introduced by interracial English groups like the Specials, Madness and the English Beat, which combined a ska revival with the antic energies of punk. Among the bands to emerge out of the new wave movement in Britain with reggae stylings were the Clash and the Police.

During the late 1970s and early 1980s the sounds of Jamaica were influencing many New Zealand artists including Coup d’Etat, the Screaming Meemees, the Newmatics, Dread Beat and Blood, Aotearoa and Herbs. Herb’s French Letter was originally released in 1982 and re-released in 1995. to coincide with the French resumption of nuclear testing in the South Pacific.

1990’s – In England reggae influenced and dubby sounds have been transported into the 1990s by acts such as Dub Syndicate, African Head Charge, Jah Wobble’s Invaders of the Heart and Natacha Atlas. Many of these acts fuse Jamaican influences with other sounds from around the world. Jamaican influenced music has mutated further through ragga andjungle into drum n bass.

The influence of ska, reggae and dub music is still strongly evident in contemporary music today as a new generation continues to evolve from the legacy handed down by the great luminaries such as Bob Marley, Peter Tosh and lesser known artists. Internationally, new artists like Ben Harper and Finlay Quaye display strong reggae influences in their work and New Zealand acts embracing these sounds today include the likes of Salmonella Dub and Pitch Black.

The History and Development of Reggae Music Quiz

In your own words describe the development of Reggae, Ska and Dub and take into account the key features discovered in this lesson (as detailed below). For this short essay there is a maximum of 15 marks to be attained. Your writing should be well structures and approximately 150 words in length.